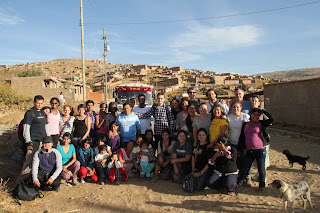 Another season in Bolivia comes to an end, with a despedida in Loma Pampa as we said goodbye to our cherished friends. It has been an amazing year. We have accomplished so much, with a great group of smart, energetic and enthusiastic students. Will we be back again next year? That is not a question I can answer as of yet. But it has been a great four years.
More pictures can be found on my Facebook page. Vayan con Dios!
Posted by Daniel Goldstein on Sunday, August 07, 2011 No comments: 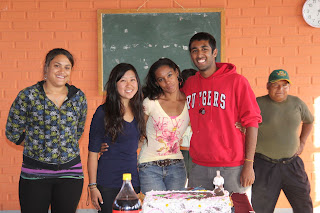 It is the final week of the program, and as is the case every year, we are all busy with the ritualized goodbye celebrations known as despedidas. In each of the communities where we have been working, the people express their thanks for our presence and contributions by making speeches, exchanging hugs and handshakes, and most of all, by inviting us to consume large amounts of food.
Yesterday we celebrated the conclusion of the baking project in the barrio of San Ysidro. Over the last six weeks, our students have worked alongside the women of that community as they learned to bake cakes, pastries, empanadas and salteñas, all of which they shared with us at the despedida. The women positively glowed with pride as they showed off their products, insisting that each of us eat at least one of each of the items on display. I have high hopes that this project will continue after our departure, especially once the kitchen that we have helped to finance is completed and the women have a dedicated space in which to do their baking.
For much of the summer, it must be said, our students were unsure of their contributions to this community. Though they organized sports and English classes for children and worked together with the women as they learned to bake, the students often felt as though they weren't actually "doing" anything. But at the despedida last night, all of us were blown away by the extent of the women's achievement and their deep gratitude for what we had provided them. Women praised our students, and the kids with whom they have been working gave them enormous hugs and begged them not to leave. The students, I think, realized for the first time the nature of their contribution - that just being present in this community, getting to know people and providing the resources through which these women could improve their lives and the lives of their families, they had accomplished a great deal. 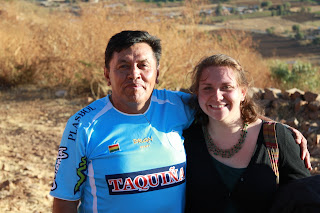 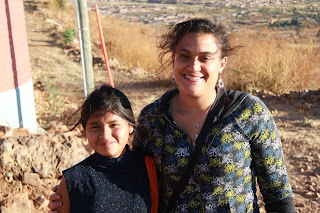 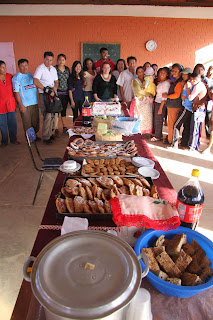 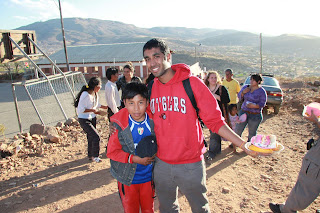 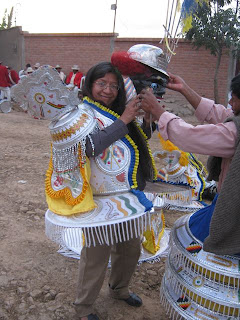 I just found some pictures on my other camera from the 16 de julio celebration from three weeks ago. "16 de julio" means July 16th, which is the anniversary of the founding of the city of La Paz. "16 de julio" is also the name of one of the barrios where our students are working, a barrio that was settled by migrants from the city of La Paz, and so they celebrate their hometown anniversary with a big parade on July 16. Our group attended, and somehow got drafted to parade alongside the costumed dancers, performing the morenada (a traditional dance that is, fortunately, quite easy to learn). For two hours we danced through the streets of the barrio, adding a foreign accent to a decidedly local celebration. 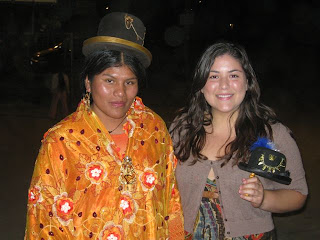 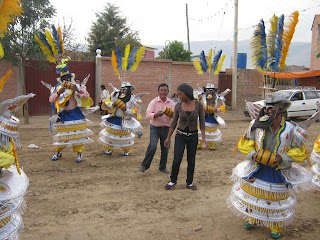 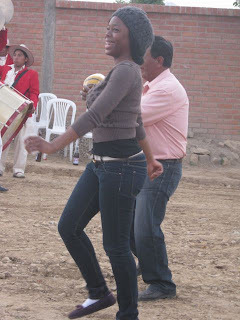 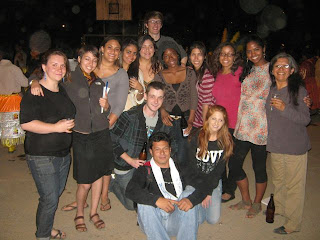 Posted by Daniel Goldstein on Wednesday, August 03, 2011 No comments: 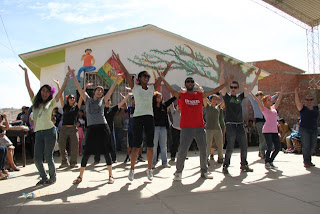 My mom has been complaining that the blog this year is both boring and infrequently updated. To try and address these critiques, I have included an exclamation point in the title of today's posting.
This weekend we celebrated the 12th (I think) anniversary of Loma Pampa with our barrio friends. The highlights of the event this year were the performances by our students, who sang and danced and put on a show unlike anything ever seen in the barrio. Against the backdrop of the mural painted by last year's group, Aman sang an original version of "Gringa Bonita," the best line of which went "we can't help it if we're gringos," which brought big laughs from the crowd (who apparently thought we could help it). This was followed by a big dance performance that featured such classic tunes as "YMCA," "Thriller," and, unexpectedly, "Cotton-Eyed Joe." After the big number, some of the students led a group of children in a dance activity, and then Joyelle and Carmen, a friend from Cochabamba, performed an improvisational modern dance number. The whole thing was quite spectacular.
Another exciting moment came in the big dance competition that followed these performances. Several pairs of students participated, along with a few barrio residents, performing traditional and not-so-traditional Bolivian dances. Though the pair of Hayden and Blondeen made it to the final round, the prize was won by our own Pamela and Guery, who then turned their prizes over to the people in the crowd, who eagerly accepted the bags of pasta, bars of soap, and bottles of cooking oil that they distributed.
The efforts of our students, both today and over the past month, have not gone unrecognized by the residents of Loma Pampa. As part of the anniversary event, the barrio leaders called each student by name to approach the microphone, and presented them with certificates of appreciation for their work. 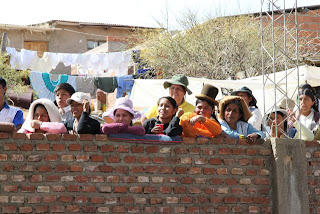 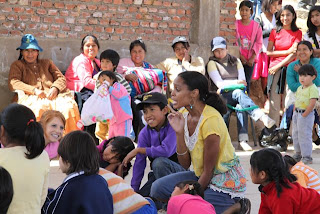 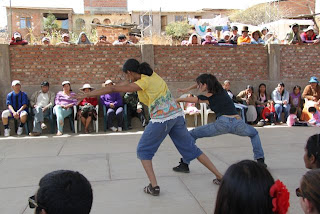 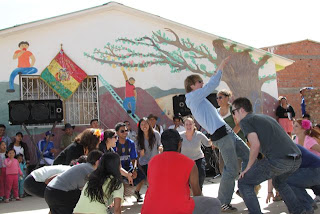 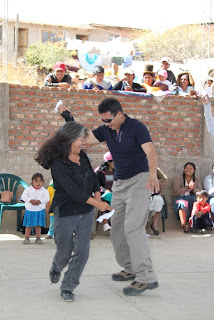 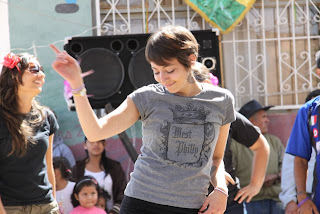 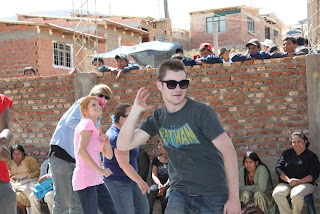 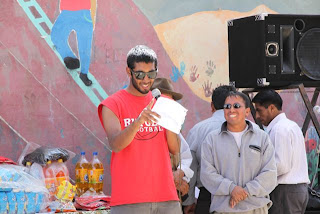 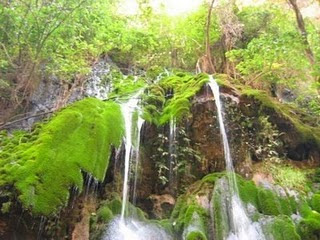 The students are traveling, and I get a few days off. Most of them went to Torotoro, where they will hike across stark plateaus and through dramatic valleys; swim beneath waterfalls; wriggle on their bellies through dark, sandy caves; and examine the fossilized turds of ancient dinosaurs. A smaller group has gone to Lake Titicaca, to visit the lakeside town of Copacabana, and the Isla del Sol. Everyone will be back Saturday night, in time for our regular visit to Loma Pampa on Sunday.
Posted by Daniel Goldstein on Thursday, July 28, 2011 No comments:

After three days in La Paz, I am remembering why I like Cochabamba so much. To most people it probably seems like a dry, boring town, but to me it is peace and tranquility. Yes the traffic is bad, and I get sick way too often; but the light has a quality that fills up spaces, making them glow from the inside. The air is too polluted, but it is always warm and gentle, and holds you without letting you drop. Not like the air in La Paz - at 12,000 feet the air is so thin and insubstantial, it barely offers enough to breathe, and does nothing to buffer you from the harsher elements. And it is cold! In Cochabamba, even in winter, the cold does not penetrate your bones as it does in La Paz. Here it is mostly warm, the people are mostly warm, the sidewalks are mostly warm, the sunsets and sunrises. There is room here to breathe.
Posted by Daniel Goldstein on Tuesday, July 26, 2011 1 comment: 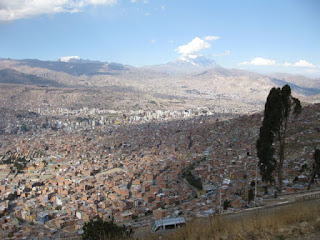 Tomorrow we leave bright and early (4:30 AM!) for the trip to La Paz. We will be visiting the pre-Incan archaeological site of Tiahuanacu before heading into the city itself. There we will meet with some researchers from the Observatorio Sobre Racismo, and the next day with some young Aymara rappers in the nearby city of El Alto. Home to Cochabamba on Saturday night. Feliz viaje!
Posted by Daniel Goldstein on Wednesday, July 20, 2011 1 comment:

Email ThisBlogThis!Share to TwitterShare to FacebookShare to Pinterest
Older Posts Home
Subscribe to: Posts (Atom)
Welcome to the official RU Service Learning in Bolivia weblog, now in its fourth consecutive year. The purpose of this blog is to keep all interested parties - parents, friends, colleagues, prospective students - informed about what our group is up to during our summer field school/service learning program in Bolivia. This program is based on the philosophy that good scholarship can also do good for society, while enriching that scholarship in return, and that undergraduates can contribute in meaningful ways to the whole process. Comments welcome.